My fingers are moving, but it appears as though my characters are writing themselves

I want to talk about three Fantasy Series that I love and feel are underrated. I found two of these series through Facebook and the third I found scrolling through Amazon. They are all definitely High Fantasy and I often see them compared to Sarah J Maas’s Throne of Glass Series. While that might be a good selling comparison, each of these series are unique and engaging, and each book keeps me wanting more.

Each of these series has strong, capable female leads that are powerful in their own right. There’s romance, forbidden or otherwise, magic, action and betrayal. While I’m in the middle of two of these three series, each book has made me want the second, third, fourth, etc.

I could keep vaguely talking about the series, but maybe I should name them. Two of them I’ve talked about and reviewed some of the books, while I haven’t really talked about the other one, since it’s been so long since I read it. I’ll be linking Goodreads and inputting the synopsis of the first book in this post. I’ll also link the author’s websites as well.

If you’re looking for high fantasy books that aren’t mainstream, you definitely want to check these out.

I’m going to start off with Elise Kova’s Air Awakens Series. Elise Kova has become more popular over the last few years, with her newer releases (Wish Quartet and Loom Saga), but I’m talking about her Fantasy debut Air Awakens and the following novels. When I found these books, I bough the first two right away, and I prayed that the first one wouldn’t flop. It didn’t. I remember reading the second one on a flight back from San Antonio and wanting to scream at the ending.

This has absolutely become one of my all time favorite fantasy series, and I’m definitely planning a reread. I love Vhalla and Aldrik so much. I gave the books to my friend and she loved them just as much. They are engaging and tell a compelling story, and holy crap Elise is such a talented writer. These books just leave you wanting more and more. Also the covers are gorgeous.

A library apprentice, a sorcerer prince, and an unbreakable magic bond…

The Solaris Empire is one conquest away from uniting the continent, and the rare elemental magic sleeping in seventeen-year-old library apprentice Vhalla Yarl could shift the tides of war.

Vhalla has always been taught to fear the Tower of Sorcerers, a mysterious magic society, and has been happy in her quiet world of books. But after she unknowingly saves the life of one of the most powerful sorcerers of them all—the Crown Prince Aldrik—she finds herself enticed into his world. Now she must decide her future: Embrace her sorcery and leave the life she’s known, or eradicate her magic and remain as she’s always been. And with powerful forces lurking in the shadows, Vhalla’s indecision could cost her more than she ever imagined.

Books in the series:

Tales from the Front (novella)

Even more exciting there is a prequel trilogy:

And finally, just recently Elise revealed that there is going to be a sequel series (or trilogy) called Air Awakens – Vortex Chronicles, which I’m super excited for! 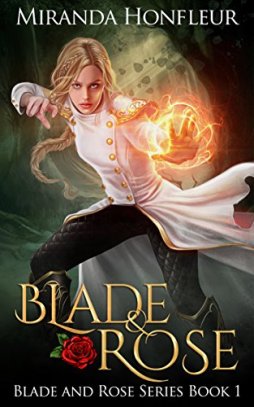 The next series is Miranda Honfleur’s Blade & Rose Series. Initially I think Facebook showed me an ad for this series, and I probably took a screenshot, but if I remember I ended up finding it again on Amazon. It sounded like a fantasy I would like so I bought it. I didn’t realize that it was basically a brick of a book, and each book get’s significantly longer – the first book is 680 pages long, so be warned. If you’re someone who likes physical copies of books, this series is going to take up substantial space on your shelves and they are heavy to carry around.

I do have a review for Blade & Rose the first book in this series, so I’ll link that here. I really enjoyed the relationship between Jon and Rielle and how they work together. The magic system was a little confusing, but overall this book is just one exciting ride, and I found once I started it, I pretty much didn’t put it down until I finished it.

Then I purchased book 2…which I haven’t gotten to yet. It’s daunting at 742 pages.

I plan on reading the second and third book soon, so I can order book 4 without feeling like a turd for buying the series and not reading it. Also, I love the covers of these books, and I cannot wait to see were Miranda is going to take the series. The ending of book one left me anxious with anticipation.

A kingdom in turmoil or the love of her life. Which one will she save?

Elementalist Rielle hasn’t heard from her best friend in far too long. Yet no one at the Tower of Magic seems to care about Olivia’s silence, or the curtain of secrecy surrounding the distant capital. Before Rielle can investigate, she’s assigned a strange new mission: escort a paladin named Jon across the kingdom.

When whispers reveal mercenaries have killed the king, taken the capital, and that no one is coming to help, Rielle can’t leave Olivia in peril. But as infamous mages and deadly assassins hunt Jon, she can’t leave him unprotected either—especially as she finds herself falling for his strength, his passion, and his uncompromising goodness. Her past returns to haunt her, a werewolf stalks their steps, and an ancient evil is gathering, yet the restraints forbidding their love strain and snap one by one.

Saving Olivia and the kingdom means defying orders and sacrificing her every ambition, and could mean losing the man who’s become so much more to her than a mission. Which will she choose: her best friend and the kingdom, or the love of her life?

Dive into a medieval world sensual and dark, full of magic and greed, love and blades, where factions vie for influence and there are no easy choices.

Books in the series

Queen of the Shining Sea

Finally, the last series I want to talk about is Carrie Summer’s The Broken Lands Series. I found the first book in this series Heart of the Empire around the same time I found Blade & Rose and ordered both together. When it arrived at my house I stood in my kitchen and read the first six chapters and I was hooked. I’ve read book two, and holy crap I cannot wait to finish this trilogy with book three.

Carrie Summer’s has many books and many different series, and I’m so glad I found her, because I want to read everything she’s written.

Heart of the Empire is such a great book – review here – and so well written. I thoroughly enjoyed it and I’m trying to get all my friends to read it, because I know they’ll like it. Since I do have review for the first two books (book 2 review here) I won’t go into too much detail – feel free to check out the reviews, but Savra does not give up, even when all the odds may be stacked against her, and Kostan constantly strives to be the man he wants to be, even though the world would rather force him to be otherwise.

The Empire is heartless, but fate is crueler still.

Tainted magic spills from a crack between worlds. Quakes rattle the Atal Empire, opening rifts that split towns in two. As the land shatters and betrayals cleave the Emperor’s court, ancient power awakens in a flame-haired young woman.

Savra, a miner on a remote coast, lives in relative innocence of her Emperor’s savage rule. When she turns seventeen, she expects to be assigned sluice mining as her official Function. Everyone from her home village is a sluicer–unless they turn renegade and fugitive like Savra’s father. But when she’s suddenly torn from her home, turned pawn in the plots of madmen, a chance meeting with a young man provides the first glimpse of her tangled destiny.

For nineteen years, Kostan has been groomed for one thing: ascension to the throne. One of thirteen imperial Scions, he bears a wound that won’t heal until his twenty-first birthday. On that date, only the shape of the Scions’ scars will determine the next Atal Emperor.

Savra secretly fears she carries her father’s rebel blood. Kostan despises everything the Empire stands for. Neither desires a fight, but as the Empire crumbles around them, they stand on opposite sides of a war. Each could be part of Empire’s salvation, if only they could bridge the chasm dividing them.

Books in the Series –

Heart of the Empire

Rise of the Storm

Fate of the Drowned

All of these authors are fantastic writers, who tell fantastic stories. I’m so happy that I can call them some of my favorites, and hopefully I’ve convinced you to check these series out. If you do, I’d love to know your thoughts. I don’t think you’ll be disappointed if you do.

If you like high fantasy adventures, where the fate of humanity is being fought for, and kick-ass women are fighting to survive and surmounting seemingly insurmountable odds, with magic and romance, then you’ll definitely want to check these books out!